Florence, home to many masterpieces from geniuses like Dante, Donatello and Michelangelo. It's an authentic open air musuem where the Spirit of Renaissance is still alive. Florence was recognized by UNESCO as the World Heritage Site since 1982 and attracts millions of tourists every year.

TOP THINGS TO DO IN FLORENCE, ITALY 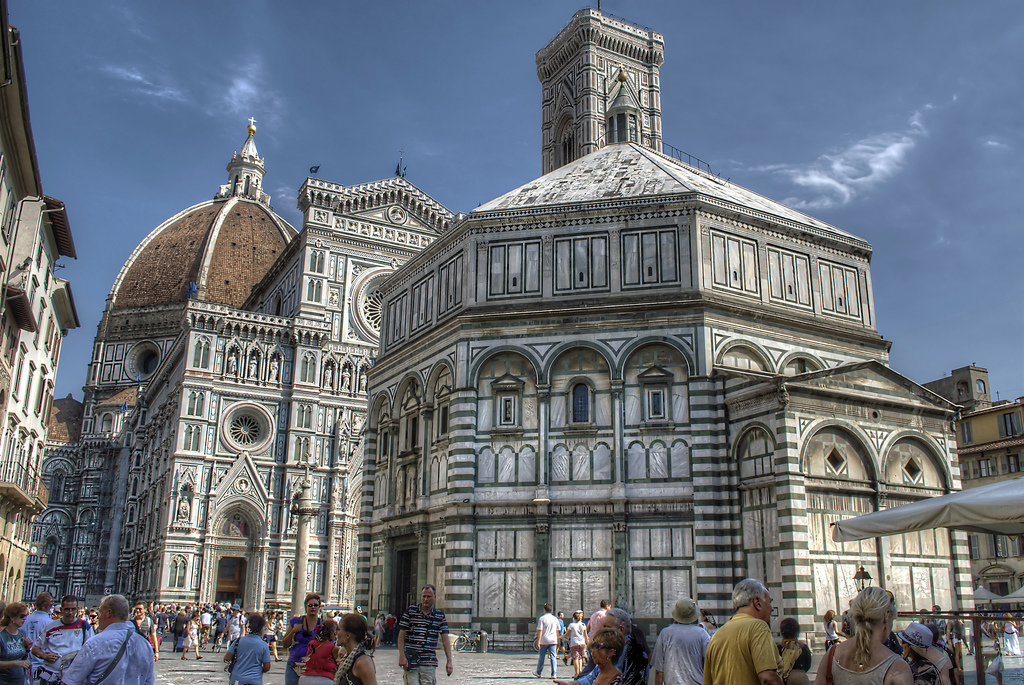 Any Florentine trip certainly includes the Piazza del Duomo (the jewel in the city’s crown) and its three UNESCO World Heritage buildings. Rubberneck amid the sketchers perfecting Renaissance imitation. The white marble hits its prime at night, when the Tuscan sky blushes deep blue behind it. When you venture inside, don’t forget to look up. 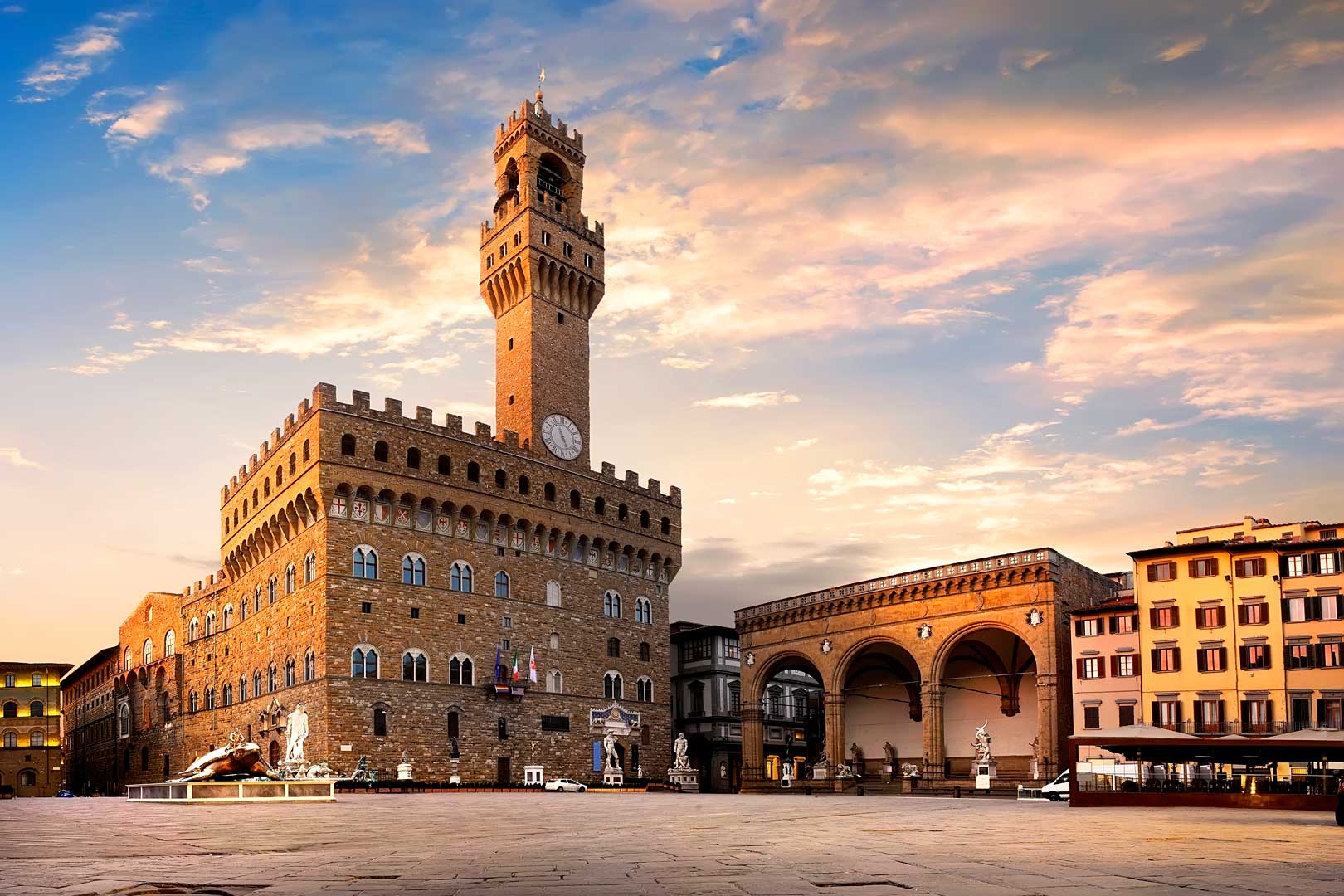 Not in the mood to rub elbows with busloads of tourists? Opt to explore this Tuscan classic during siesta time. But by all means go. The square’s so pretty it can’t take a bad picture. The Loggia dei Lanzi is an open-air museum of Renaissance sculptures – and they’re free to peruse. Afterwards, sip an authentic cappuccino in one of the many cafes cloistered nearby. 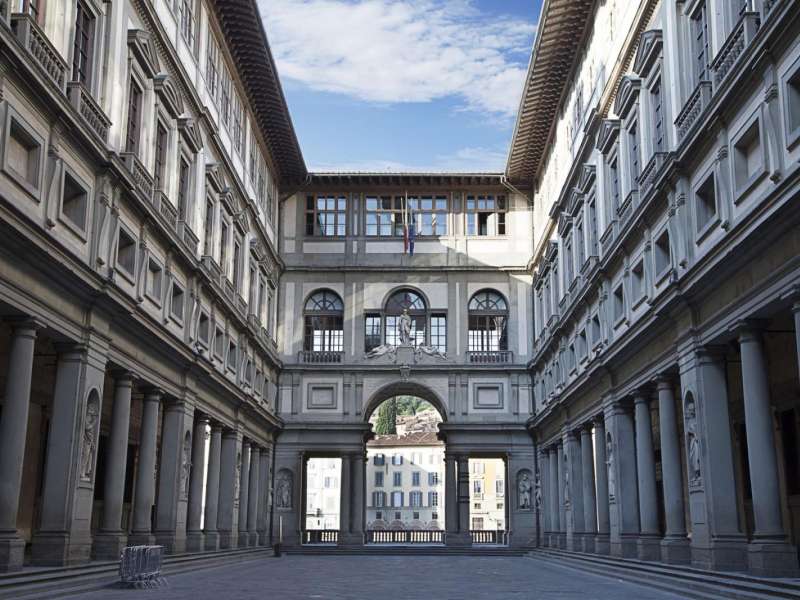 What makes Florence the epicentre of art? All of it; but specifically the Uffizi Gallery. Its collections cover the ages, but its darlings will always be Renaissance born. You won’t find a better Art History 101 refresher. Hours wilt away inside this U-shaped mansion. The Birth of Venus tops many a best-of list. Better book tickets in advance – the masterworks cause quite a queue. 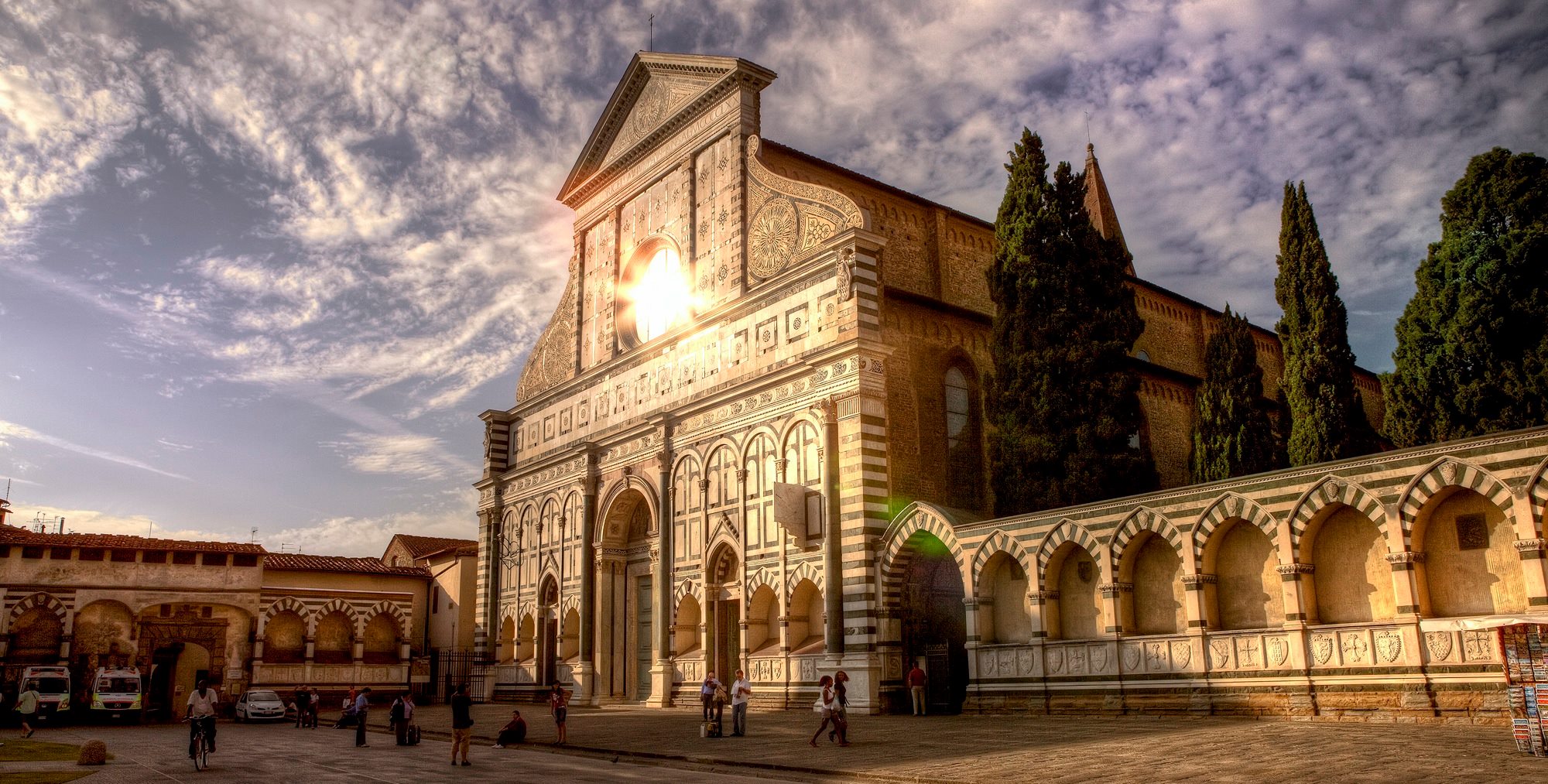 You don’t have to be religious to fall to your knees inside this 13th century Basilica. This architectural feat (be prepared to awe at its breadth) brims with masterworks from late, great Italians: Ghirlandaio frescoes, Giotto’s paintings and Alberti’s Renaissance facade. Built under Dominican supervision, the monks also gathered herbs and potions for Italy’s oldest pharmacy. 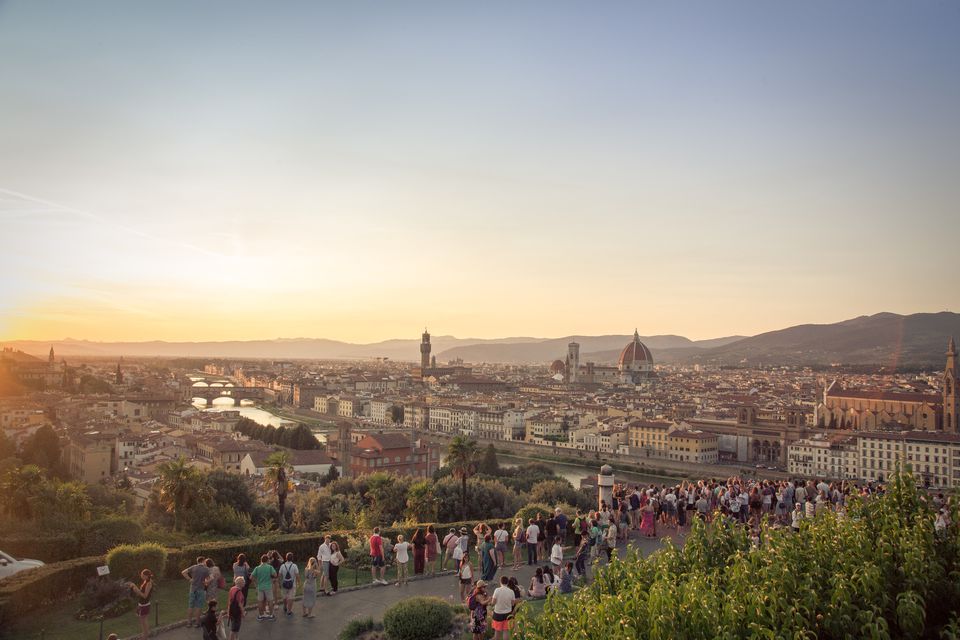 You can’t beat a Tuscan sunset from Piazzale Michelangelo. Follow the winding path and stone steps that scale the hillside from the Arno and Piazza Giuseppe Poggi. After a brisk walk, you'll find views that rival any in the city. The red rooftops and rolling hills of Florence stretch out before you. Decent dining is hard to find in these parts, so pack a picnic, bring some vino, and drink in the sights. 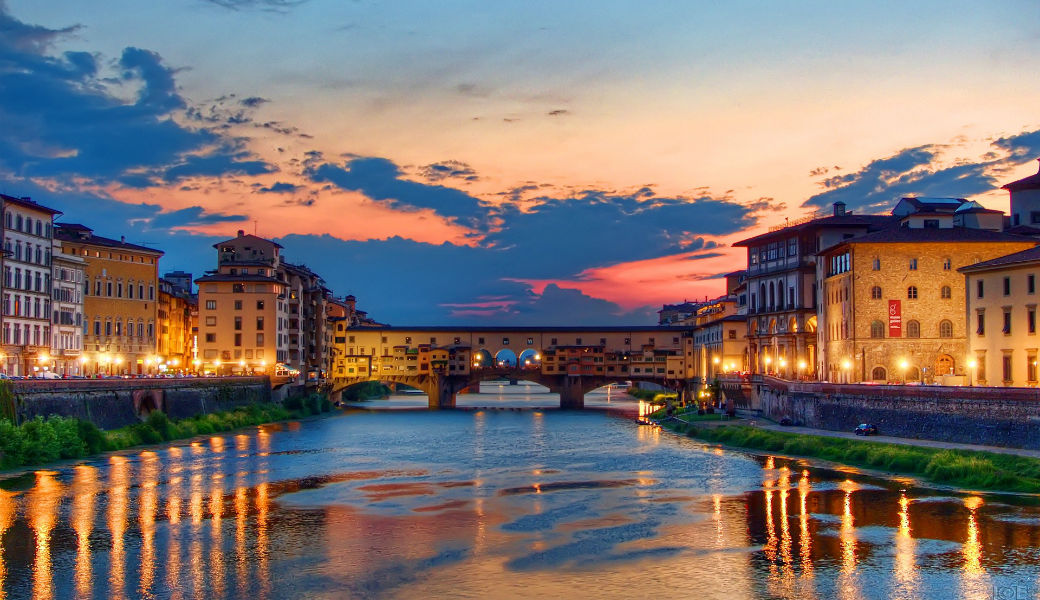 Peruse the shops perched above the River Arno on this pedestrian bridge. Dating back to 972, its history is the stuff of storybooks. Ponte Vecchio’s seen it all from noble feuds to ruinous floods. Once a market where vendors sold meat, the smell of raw flesh tossed in the Arno disgusted the Medici dukes. Today’s retailers are much less carnivorous (they’re jewellers). 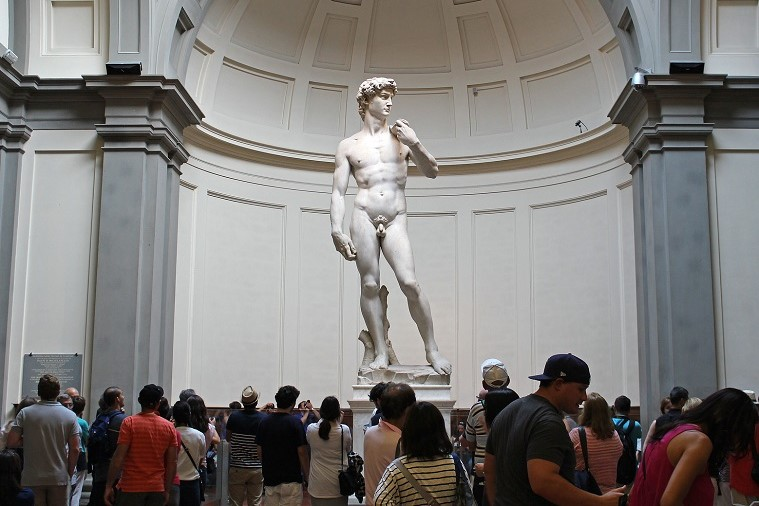 Michelangelo immortalized David (he’s dreamy, we know) from a single marble slab. He’s frozen in exquisite detail moments before his battle with Goliath. Perhaps the world’s most beloved nude, everyone who visits Florence flocks to the feet of David (the line outside proves as much). Take a picture with your mind, cause cameras aren’t allowed. 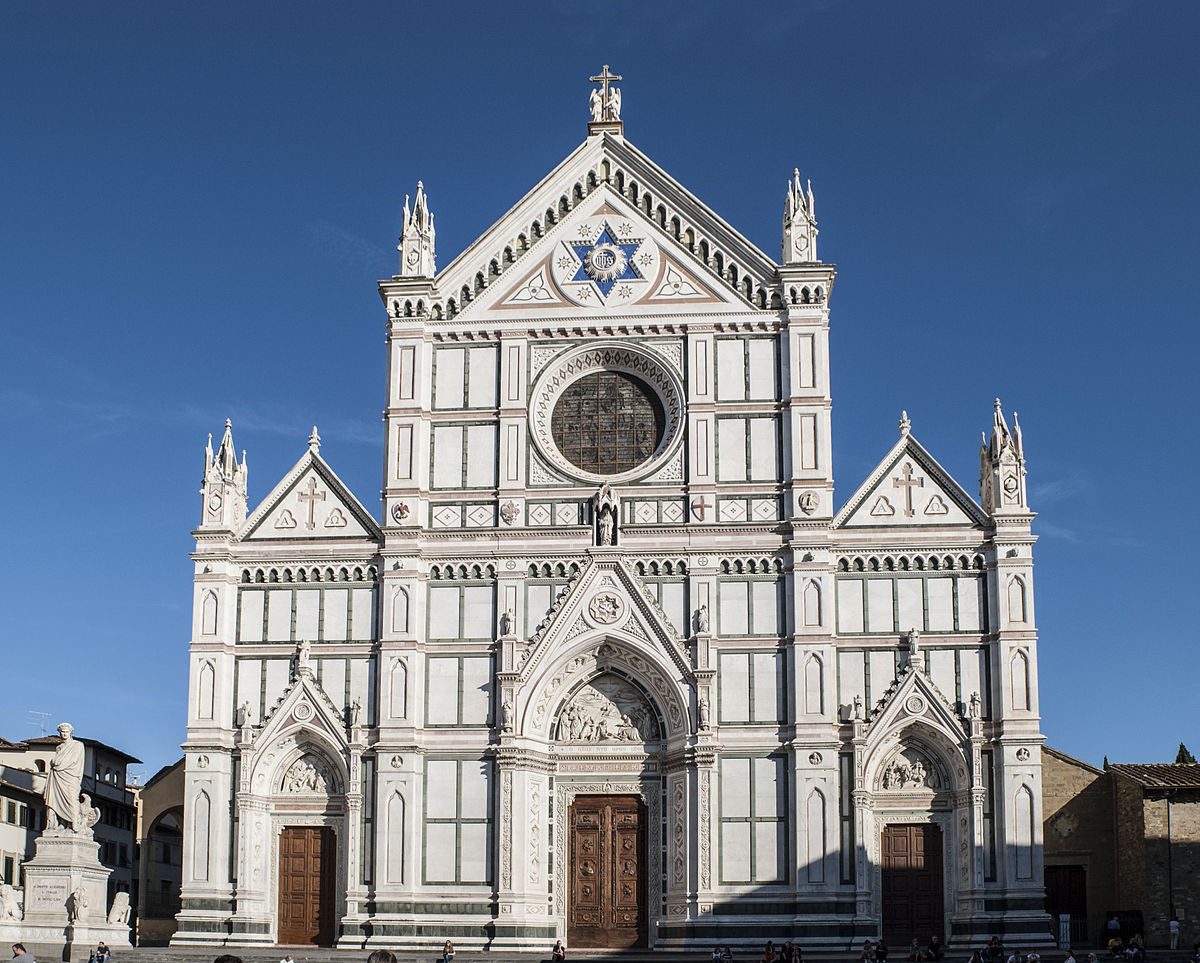 Science and telescopes almost cost Galileo a Christian funeral. His head finally found rest beneath a tombstone in this Franciscan Basilica. His ghost’s in good company (Rossini, Machiavelli) – and there’s nary a more stunning cathedral in which to spend eternity. View Donatello’s handiwork (the Crucifix and gilded Annunciation) as well as myriads from other masters.

Former home to the grand dukes of Tuscany, this Renaissance-styled gargantuan is a peephole into high society. Much of the residence remains in its original styling. Uncover how the 1% lived with a visit to their Royal Apartments. Or put on your history hat. The Carriage, Costume, and Silver museums will take you to school. Recess in Boboli Gardens with its grottos and green. 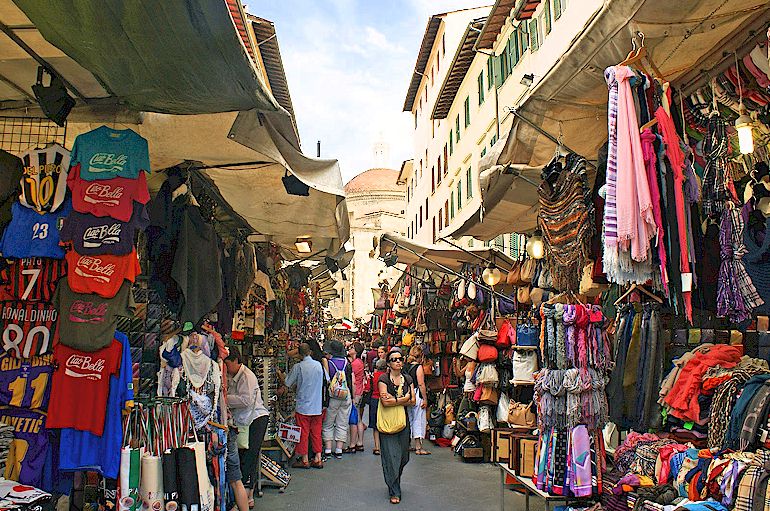 Noisy in just the right way, the San Lorenzo Market marks the spot for souvenirs. Especially leather. Leather jackets, leather wallets – all with that “made in Italy” artisan wink. Meander the other vendor’s crafty wares until hunger sets in. A piatto of Florentine fair is easy to score at Trattoria Mario, so indulge your growling stomach with something typically Tuscan.